Great video from Buffalo State students Jacob Becker and Edward Mazzu at our 1st art in of the season.   Thanks to regular Painting for Preservation artists Liz Cazprski for speaking so eloquently about why we do what we do! 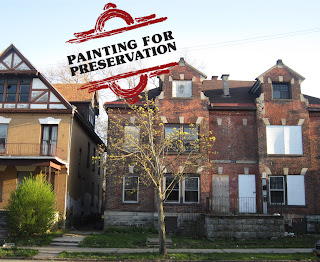 This is a classic Painting for Preservation event.


We invite you to join this group of artists and preservationists to make art on-site at a simple and overlooked but beautiful and preservation-ready historic building. This one is very unique in Buffalo.

We believe that the building is vacant and has an out-of-state owner. The collaborative urban farm Farmers & Builders has looked into purchasing the property. We support their acquisition of the building, if possible.

Make art of the building in any media you choose, paint, pastel, photographs. Artists of all media and skill level are welcome. You are also invited to just talk about the building and observe the artists.

The building at 53 Laurel dates to ca. 1907 and is a carefully designed brick and stone double residence. Laurel Street is an intact street with lively and responsible residents, looked just off the Michigan Street corridor.

We made art and learned a lot at the Art-In at the Wilkeson House on Saturday, March 31, 2012. We learned how to answer these questions and comment accurately and effectively:


Person #1: Residents can't complain about the bridge traffic, pollution, demolition, because they knew they were buying a house near the Peace Bridge...

Painting for Preservation: The houses were there first, the Wilkeson House (ca. 1863) is older than the majority of the City of Buffalo! It and it's neighborhood houses predate the Peace Bridge (ca. 1929) by over 50 years. Some of the residents in the Columbus Parkway area are fifth- and sixth-generation  homeowners. At the time these homes were built, they were on Prospect Hill over looking Olmsted's Front Park to the Niagara River. Today some of them stare at the blue roof of the Duty Free shop, the only blue they'll see because of obstructions to the view of the Niagara River.

Painting for Preservation: When the PBA bought the Wilkeson House it was already vacant, but that could have more to do with it's already obstructed view than anything else. Also, there are people currently living in a historic house immediately adjacent to the Wilkeson House, showing that people do and want to live in that neighborhood.

People do want to preserve the Wilkeson House and their may be a buyer out there too, but the current offer of the PBA to give the house to a willing party is nearly impossible because of the stipulations, like needing a $10k deposit and having to move the brick house before June to another piece of land.

Person #3: Preservationists are obstructing economic development, again. Buffalo needs the income from the trucks coming across the Peace Bridge...

Painting for Preservation: As the following recap will detail, there are no plans beyond demolishing the buildings put forth by the Public Bridge Authority. The public and even immediately adjacent residents do not know what the final plan that may be proposed, so NO ONE can know what the economic impact will be.

It has been researched that only 2% of trucks coming over the Peace Bridge stop in Buffalo. Over 98% continue on South for an average of 500 miles. More trucks does not mean more money for Buffalo - it may mean more tolls for the PBA, but we don't know that either because they don't have to share their finances even though their operation is partially funded by taxpayer dollars.

Lastly, there is no denying that passenger traffic over the bridge would be greatly facilitation by removing truck traffic off of the Peace Bridge to an area that can handle their size and number.

The week after the Art-In the Public Bridge Authority held a public meeting on April 4, 2012. This is a recap from Jason Wilson of Buffalo's Young Preservationists who attended;

It was less of a public meeting and more of an empty basement room with PBA officials outnumbering citizens 6-1. By scheduling the meeting over 5 hours, the PBA avoided having any large number of citizens there at one time, so you kinda got a feeling of being outnumbered. There were no speakers, only a series of tables and poster-boards lining the parameter of the room.

When asked why the PBA would demolition those properties before they had a plan in place, the answer was that it was always the PBA intention to teardown the properties. 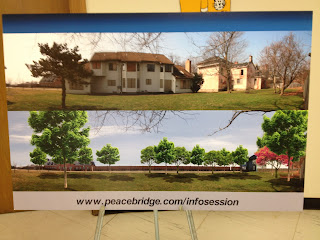 I then asked about the local landmark designation of the Wilkeson House and how the PBA could violate the protections provided it by the City's charter. Matt Davison, PBA Director of Communications stated that demolishing the Wilkeson does not violate preservation law because it was not landmarked at the time the time it was purchased by the PBA. Review of the City of Buffalo law that gives the Preservation Board power to landmark buildings shows that this is completely incorrect.

After that, I spoke with Kerry Traynor, an architectural historian and a UB faculty member, who is contracted to document the building, but not to the standards of the Historic American Building Survey. There is no additional information about this aspect of the PBA project.