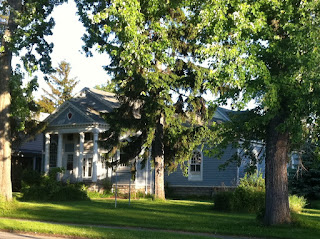 After making art at the Buffalo Unscripted's kick-off at Buffalo Central Terminal, Painting for Preservation is returning to creating on-site art at lesser-known historic buildings for their seventh Art-In on Saturday, August 13, 2011 from 9:30am to 12:30pm. The event's inspiration is the former-Parkside Unitarian Church, former-local branch of the Buffalo and Erie County Library, and currently vacant, classically-designed neighborhood anchor, known as the Fairfield Library at 1659 Amherst Street near Starin Avenue.

Painting for Preservation, often in collaboration with Preservation-Ready Sites and Niagara Frontier Plein-Air Painters, invites professional artists, amateur artists and community members to create art at historic buildings in any media (ie. paint, photography, celluloid, paper, collage, cloth, etc.). *Note to Artists: You do not have to be a realist artist to participate; all interpretations/inspirations of the space are sought and all are welcome to observe. By gathering at neglected and forgotten historic places, the artists focus a soft creative light on buildings in need of attention. The events and art work create a record of the building’s current condition with the hope of stirring additional conversation about rehabilitation opportunities and it's historic past beyond what we can read about.

The deterioration of the Fairfield Library in the much-heralded historic Parkside neighborhood and near the community-led revitalization of the Vernon Triangle neighborhood is a hard example of both the closure of branch libraries and the demolition-by-neglect of a City of Buffalo-owned property of historic significance.

Designed by the equally skilled partner of E.B. Green, William Sydney Wicks, the building was originally the Parkside Unitarian Church with classical architectural elements to reflect the democratic beliefs of the congregation, unlike overtly religious images in the iconic buildings of other faiths. Significant to the compact building is the pedimented entrance supported by columns, multi-light arched wood windows, and heavy detailing at the eaves. A later addition was made in the 1960s but the majority of the corner lot remains a generous grass lawn for appreciating the building’s proportions.

Williams Sydney Wicks was a resident of the Olmsted-designed, Parkside neighborhood for over 30 years. In some gathering of architectural genius, Wicks’ ca. 1890 self-designed family residence overlooks Jewett Parkway to Frank Lloyd Wright’s Darwin Martin House built in 1907 and the much newer ca. 2009 glass visitor pavilion by Toshiko Mori.

As the largest, membership-based community association in the region, the Parkside Community Association continues to keep an eye on the Library but has been unable to directly support its rehabilitation. Also in recent years, the Fairfield Library was sought for conversion into a single-family home by a pair of local small-scale developers with many successfully completed home restorations. The transaction of City property to private hands was scrutinized and the deal did not go through leaving the building vacant since 2005. The building is currently for sale.

There are three remaining scheduled Art-Ins for the 2011 painting months; Saturday, August 27 at St. Mary’s on the Hill; Sunday, September 11 at Saint Adalbert Basilica, and one either October 22 or 23.

Meg's Anecdotes about North Buffalo Branch Libraries
As a kid, I remember the two libraries I walked to with family members, both of these libraries in historic buildings were set-back on lovely corner lots in dense residential areas.

First, my library. The North Park branch library is hidden from the busy Hertel and Delaware intersection with shady trees and has a cozy, central entrance in an L-shaped Tudor building. The interior was even more calming than the approach with soft light in the dusty air. I had been calling it my library since the mid-eighties and I remember being the exact height to rest my chin on the circulation desk as the librarian stamped and shuffled the check-out cards. Perhaps the most precise memory - that shows the significance of local libraries as not only community anchors but life anchors for children - is my embarrassment when I had out-grown the "signature" on my library card and the librarian chuckled. Now I know that it was endearing and I was a familiar, but growing-up fast, face to that neighborhood librarian.

Second, the Fairfield Library was the branch of choice when I was visiting my Aunt and three younger cousins on Parkside Avenue. I joined in on their weekday afternoon library routine; I passed new homes, one in particular with a massive modern sculpture on the lawn, but arrived at a similarly aura-ed library on Amherst Street.

Local branch libraries are family destinations; they are the anchors of childhood that lead to independence...like the first time I rode my bike to the library alone or realized the financial penalties of procrastination in the form of personally-paid-off late fees. The era of these municipally-owned beacons is slowly closing. The Fairfield Library has been regrettably closed since 2005 and after a long hiatus, the North Park Library has re-opened, not in their historic corner building, but in a vacant strip-mall. That relocation requires additional comment but is overwhelmingly positive.
Posted by Meg Baco at 4:52 AM