Documenting the Demolition of St. Mary's on the Hill

In the face of continued demolition, Painting for Preservation gathered at St. Mary’s on the Hill at the corner of Niagara and Vermont Streets on Saturday, August 27 to capture the last of the ruins. Abandoned in 1994 and partially demolished by way of roof removal in 2009. The Church was certified as a City of Buffalo Local Landmark under the review by the Preservation Board in 2008. Necessary maintenance nor improvements were made and the building rapidly deteriorated, as one would expect a 100 year old roofless structure in Buffalo. Last Saturday, there remained the base of the bell tower, north and west walls of the sanctuary, stained glass windows, and interior columns. The adjoining guild house was severed just days before. 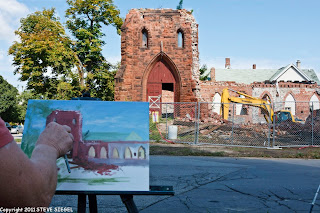 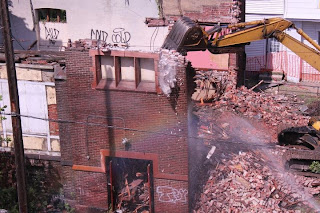 Stan Jennings from the Armory Tower

Members of the Niagara Gateway Columbus Park Association came by St. Mary’s to talk about its history as preservation-ready site and its steady decline to ruins. These guys were on hand when the bell was removed from the tower in 2005. The Prospect Heights and Columbus Park neighborhoods have been on high-alert of preservation issues for over ten years because of the proposed Peace Bridge plaza expansion. The Peace Bridge Authority owns several adjoining lots and historic buildings on Busti Avenue, including the vacant ca. 1863 Col. Samuel H. Wilkinson house – another City of Buffalo Local Landmark. 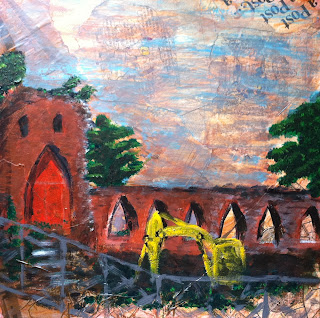 Collage and Painting by Crystal Sanchez 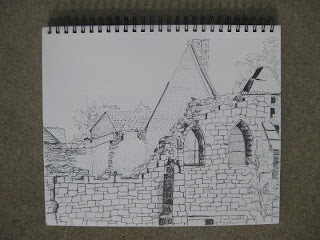 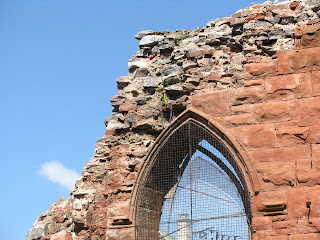 “...the windows made an impression on me today more than anything. I felt the soul of the building looking out onto the world one last time... and in some way, still graceful and grateful to those who were there to capture that essence, knowing it would soon be gone forever...”


Only a week after the Art-In, the west wall of St. Mary's which was its primary facade and the remainder of the tower were demolished. Some of the guild hall still stands.

Painting for Preservation is an inclusive and eclectic group of artists, preservationists, photographers, bloggers and community leaders that gather at historic buildings to make art with the architecture as the subject. We do not paint the actual building. Our goal is to raise awareness of the historic buildings by gathering at them, support artists working in the urban environment, and create an artistic record of our collective history. This year, we have hosted nine Art-Ins throughout Buffalo and artist's work will be on display during the National Preservation Conference in October.